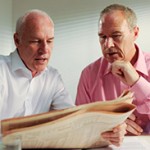 SIPP member over 75 on or after 6th April 2015? Estate planning required!

In June we speculated about what rate of tax the Chancellor would opt for as a charge on defined contribution pension funds in the event of the death of a holder (a) when under 75 if the pension was in payment and (b) when over 75. We thought the rate would be in the 35%-45% range, a modest reduction on the present 55% rate.

At the end of September the Chancellor confounded us (and almost everyone else!) by taking a completely different approach to taxing such funds. The new proposals most relevant to Wills and succession planning take effect from 6th April 2015, and are as follows:-

Death prior to 75 Irrespective of whether or not the pension is in payment, the 55% charge will be abolished and the whole fund will pass to beneficiaries tax free.

Death at 75 or over The 55% rate is reduced to 45% (we got that about right!) but a new, highly beneficial, option is introduced. Beneficiaries – not necessarily dependants – may receive the fund tax free as a pension fund and when the beneficiary becomes entitled to draw down on the fund, distributions received will be taxed at his/her marginal rate of income tax.

Implications Those in defined contribution arrangements- typically Self invested Pension Funds (SIPPS) – will need a complete rethink of their estate planning strategy with effect from 6th April next when the new rules come into effect. It would be as well to start the process now.

Let us take the example of a UK resident, a 76 year old widower, who has three children, two of whom are UK resident and one has emigrated to Spain. The father has a SIPP worth £600000 and his personal estate is £425000. On his late wife’s death her nil rate band (the Inheritance Tax free allowance of £325,000) was used to pass legacies to their children, so on his death the Inheritance Tax (IHT) free allowance will be £325,000.

There are many other permutations, and it may be that the Spanish family will also be able to take part of the father’s SIPP without any immediate tax liability. It would seem that where a member of a scheme dies after age 75, the tax consequences of any payments made to a non-resident beneficiary will depend on the terms of the double taxation agreement between the UK and the other tax jurisdiction.  However, most overseas tax authorities would regard the payment in the same way as any other taxable income as it is within the definition of “pension and other similar remuneration”.

Caution It seems highly unlikely that this regime will last, and one can easily imagine a future Government increasing the rate of tax on withdrawals from pension funds. After all, it was the present Coalition which increased the rate from 35% to 55% as recently as April 2011! It will be essential that changes made to asset allocations under Wills and Letters of Wishes to SIPP Trustees be kept under constant review.